Although I only spent one day at Ngorongoro Crater, I am going to discuss it over two posts, as it is such an incredible place and I have quite a number of photos to share too. I really wish we had spent an extra day here as, although the area is quite small compared to the Serengeti, 8000 square kilometres, as opposed to over 14,000, the scenery is breath-taking and the number of animals to see there is amazing. I know it sounds stupid saying it’s all incredible, breath-taking and amazing, but Ngorongoro really is. The crater itself was created two to three million years ago, when a large volcano exploded and collapsed in on itself, and has created a wonderful natural enclosure for many animals. Unlike the Serengeti which was dry and yellow when we visited, Ngorongoro was lush, with deep green hills flowing onto a flat emerald green basin.

We left our campsite, which was located on the rim of the crater, before sunrise (we had to wake up before 5am to pack up the camp in complete darkness) and headed towards the park gate. Driving down the steep and narrow road to the crater floor, we saw the sun peaking over the mountains. As we continued along, herds of zebras and wildebeests stopped in their tracks and watched us pass. The zebras always looked particularly stunning whenever we saw them, as their crisp white and black coast creates a stark contrast to the surrounding landscape, which makes them really stand out.

After fifteen minutes of driving through the flat basin, we came to a small forest area. As we turned a corner, we came across a herd of elephants. The were about ten of them in various sizes. We also saw a baby elephant which our guide said would be no more than a year old. It kept extremely close to its mother, constantly hiding between her hind legs. The both of them, as well as a few other elephants, came extremely close to us as they walked behind our vehicle to the other side of the road. They would not have been more than 5 metres away. It was incredible to see such large animals, let alone wild animals, up so close. I have seen elephants in zoos, but this is entirely different. And it so refreshing seeing animals in their natural habitat, rather than in an artificial enclosure.

Stay tuned for part 2 of Ngorongoro Crater, with some close up photos of majestic female lions. 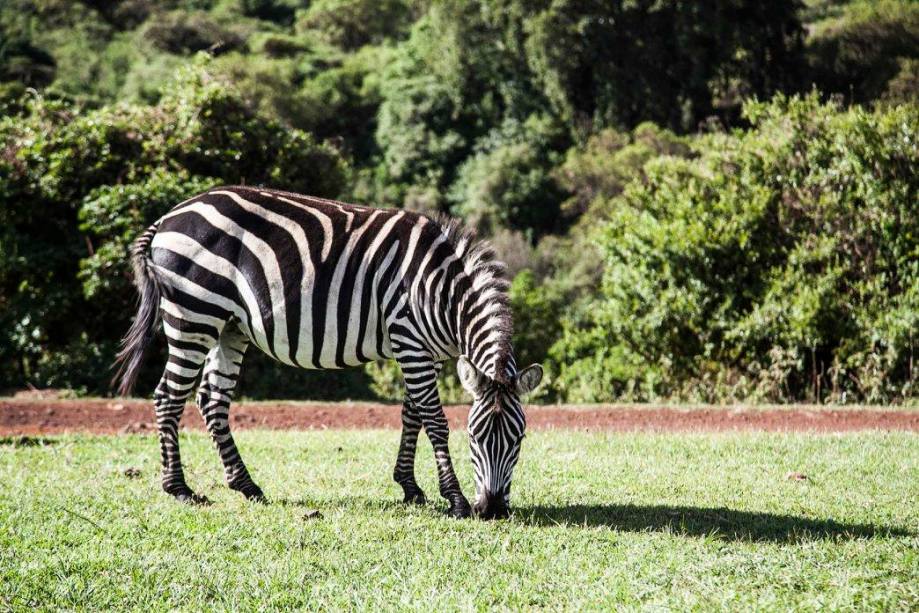 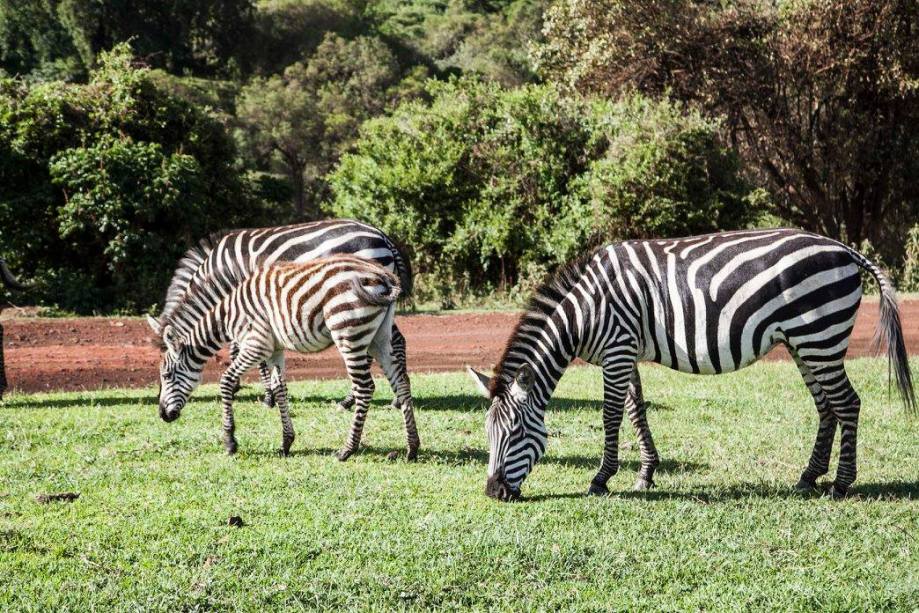 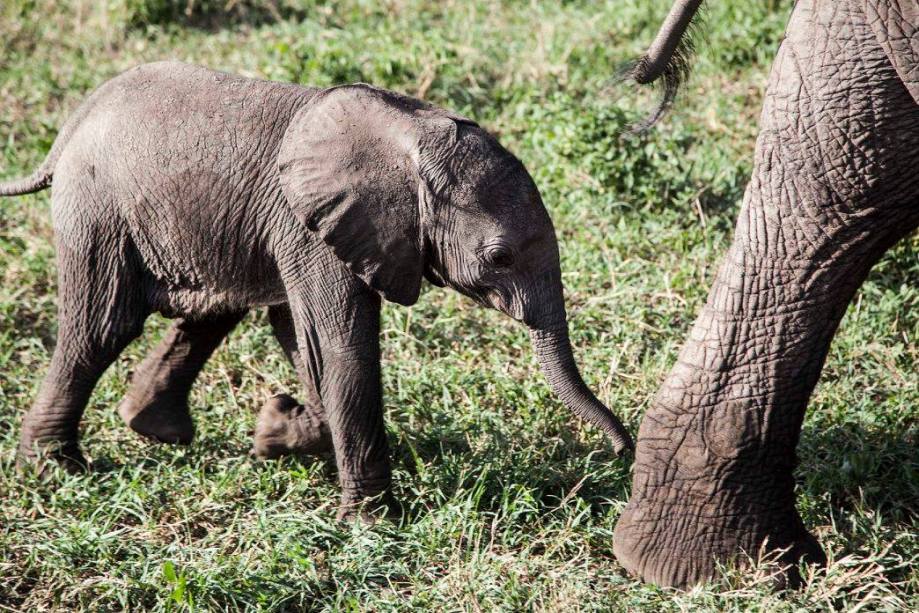 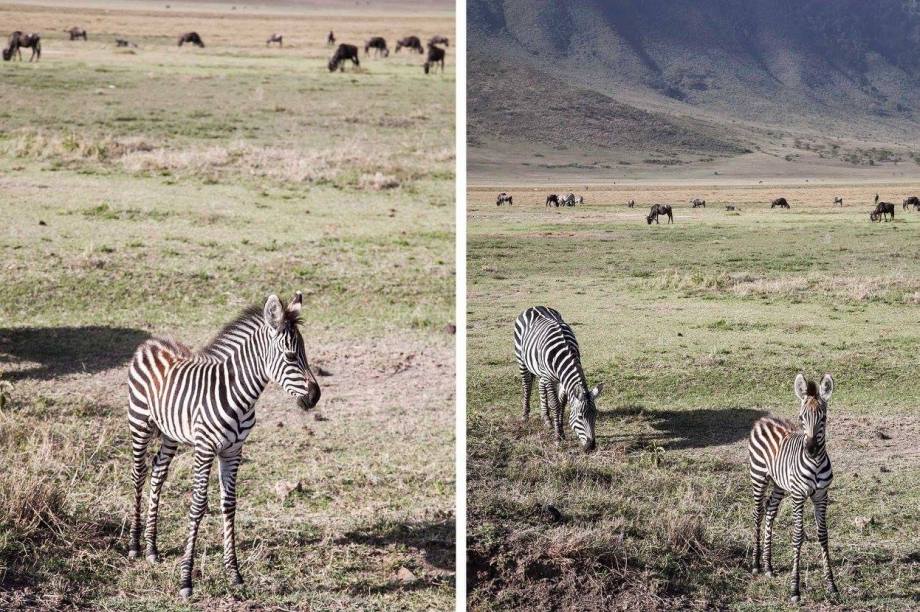 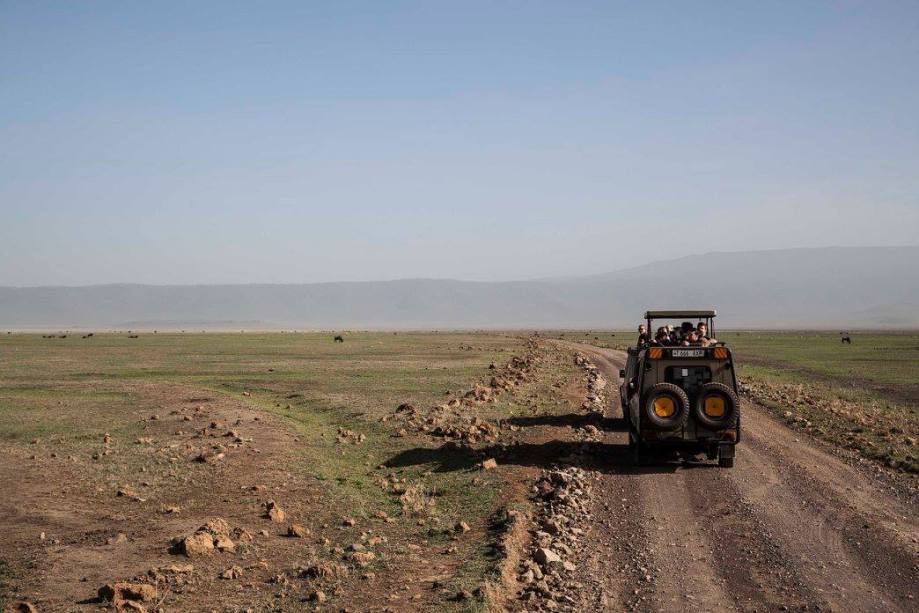 Our camp in the Serengeti was open. There were no fences create a boundary between us and the animals. If they wished to walk through our campsite, they were at liberty to. As we ate our dinner by the campfire, we heard a number of hyenas close to the camp. And the following morning, our tour guide told us that a water buffalo had walked through our camp during the night.

After an early breakfast, we headed out for a sunrise game drive, as the early morning provides good opportunities to see animals before the midday heat urges many of them to take refuge in the shade. It is also the time that the big cats (lions, cheetahs and leopards) are most active.

We did indeed see a few female lions that morning, although they were quite a distance from our truck.  Other animals we saw were zebras, gazelles, topi, warthogs, impalas, dik-diks (small little deer-like animals), to name a few. We were also lucky enough to witness the wildebeest migration. It is incredible how these animals migrate from one part of the Serengeti to another, almost in a perfectly straight line. There was also a leopard sleeping in a distant tree, but due to the insufficient lens on my camera, I couldn’t get a shot of it. Similarly, we saw  a young cheetah eating its breakfast that morning, but it was too far away for me to get a photo of it.

After lunch and a few hours of relaxing by our campsite, we headed out again for another game drive. This time were luckier and saw a number of animals quite close to us.  There was a female lion basking in the shade of a tree, a giraffe almost sticking his head into our truck and a heard of elephants walking across the road right in front of us.

Aside from the animals, the Serengeti landscape is beautiful. I visited in January, which follows the short wet season in November/December, but it did not rain this season. So instead of lush green landscapes, the grasses were dry. But these landscapes were filled with a beautiful spectrum of yellows and oranges, with small flecks of green. The landscape is dotted with small rock formations, Acacia trees, umbrella trees, among others, to create that stereotypical ‘African’ landscape. The opening of Disney’s ‘The Lion King’ was running through my head all day. AHHH ZIBENYA AMA ZEE BABA…

Next stop, Ngorongoro Crater (my favourite place in Tanzania). 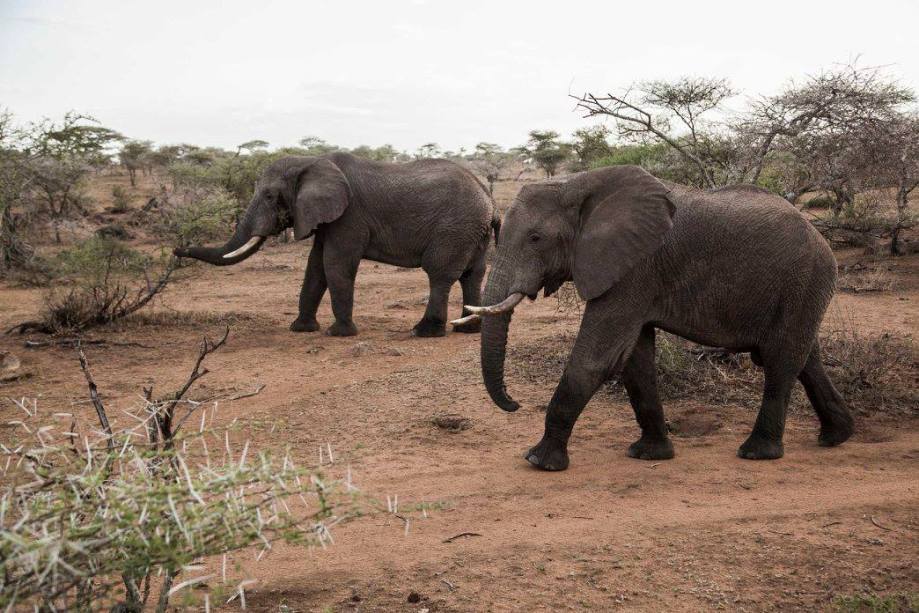 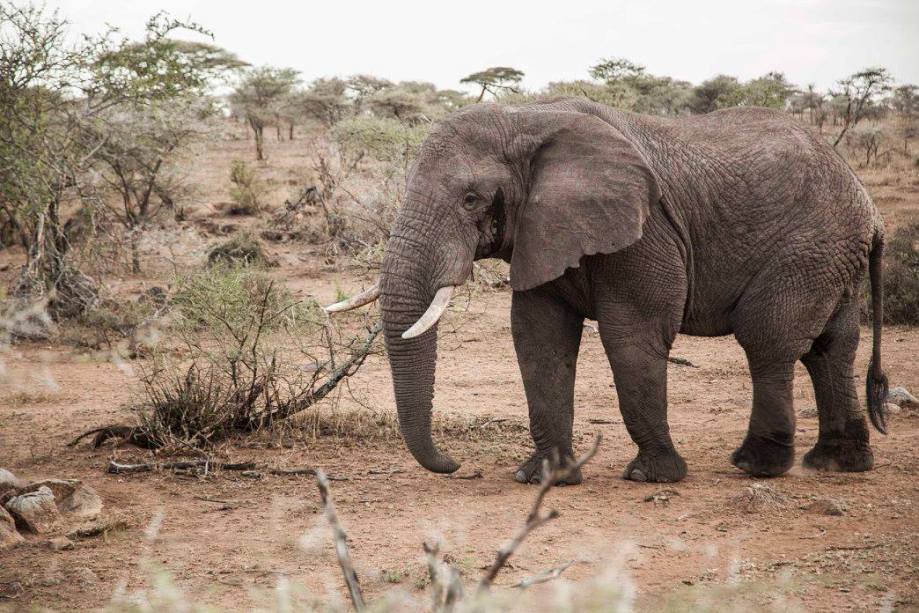 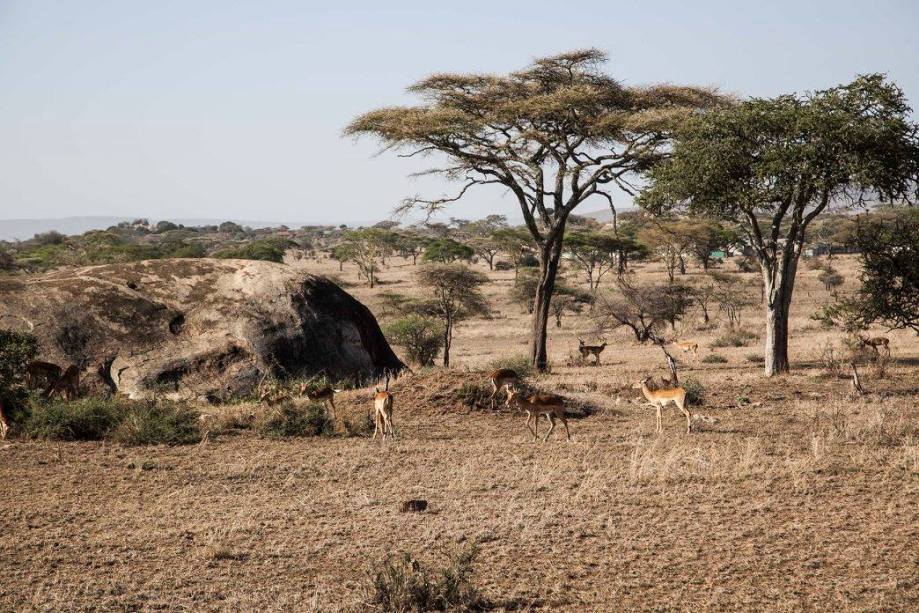 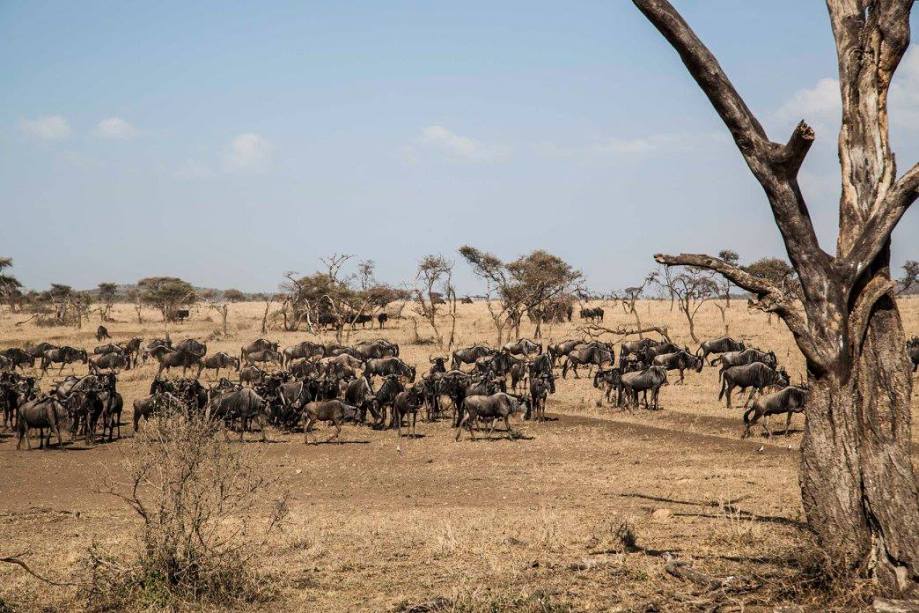 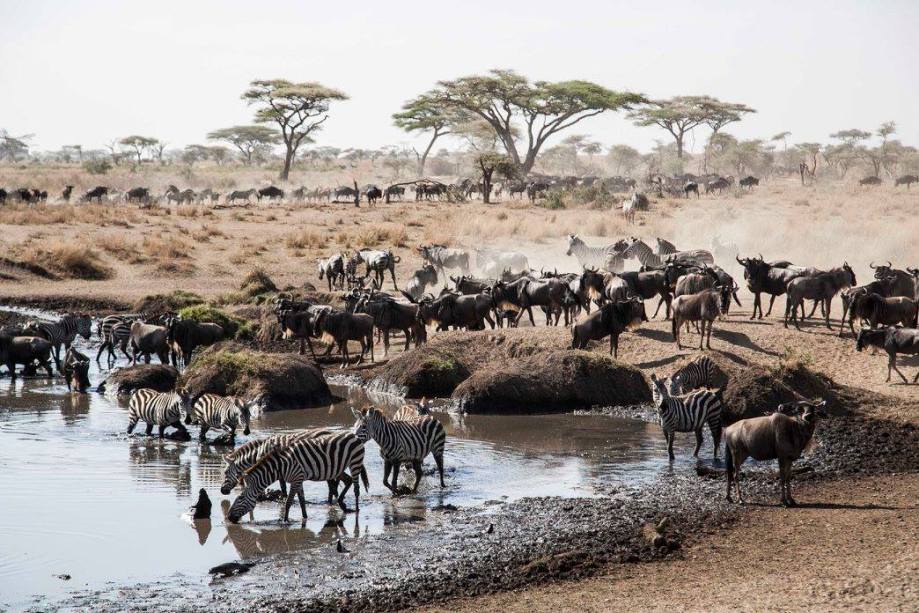 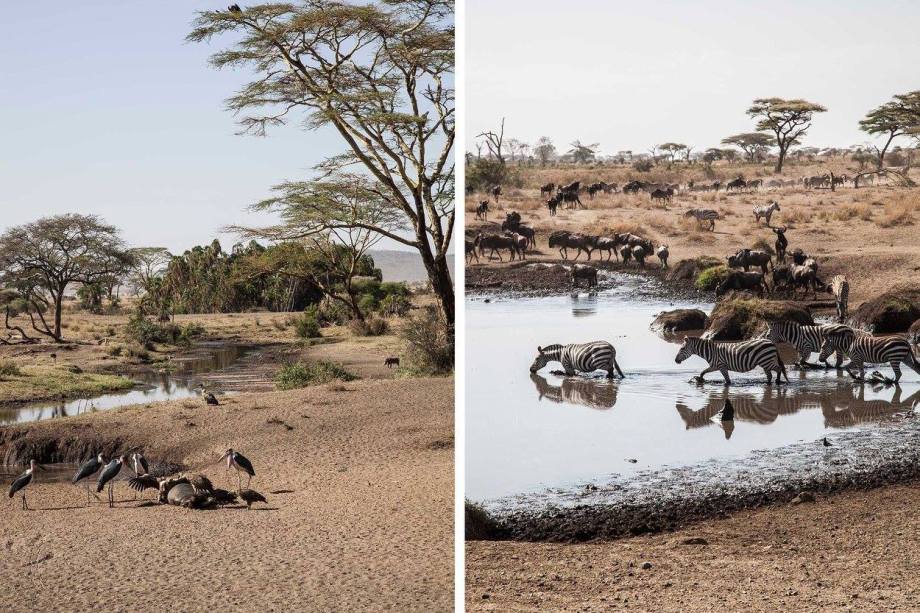 After a night in Musoma, we packed up our campsite and headed towards Serengeti National Park. To me, the name Serengeti always congers up images of the ultimate safari – vast plains filled with hoards of wild animals. And in most ways, it didn’t disappoint. Due to the size of the national park, over 14,000 square kilometres, the animals are rather dispersed, so there did not seem to be ‘hoards’ of them. Many animals were at quite a distance from our vehicle, and because it did not cross my mind to get a new lens for my camera, I had to put up with my 24-105mm and was rather jealous of my fellow travellers who were taking great shots, even with a simple point-and-shoot camera that had a good zoom. Their giraffe took up three-quarters of the frame, whereas mine was a speck in the distance. So naturally, I was rather excited when the animals were close to our truck. One piece of advice if you’re travelling to Tanzania and into photographer, don’t make my mistake and invest in a decent lens.

We had lunch at the entrance of the park and slowly headed towards our campsite, spending time to look out for animals on the way. To our surprise, the first animal we saw was a young male lion lying in the shade of a tree within ten metres of the road. Our guide told us that it was very unlikely to see a male lion, let alone one so close. So we were extremely lucky. Like most of the animals we saw during our stay in the Serengeti, he was not afraid of us and simply continued to enjoy his afternoon nap, as if we were not there.

Further down the road, we took a slight detour and drove by a small dam filled with hippos, perhaps about fifteen of them. Because their skin is so sensitive to the sun and the heat, the hippos spend their days in the water and only come ashore at night. So it’s quite unlikely that you will see a hippo walking around. We didn’t stay too long, as there is always a terrible smell coming from the water wherever there are hippos and we had to get keep moving towards our camp in order to reach it before the sun set.

As we were nearing our camp, we saw a herd of elephants walking through some broken trees. Again, they were quite close to our truck, about twenty metres away, so we were all very excited about this photo opportunity. Whenever we saw elephants, both in the Serengeti and Ngorongoro Crater, they were always in a herd, keeping very close to each other, like a tight-knit family.

We reached our camping spot just before sunset and everyone was very excited about our eventful afternoon. I think we were all impressed by all the animals we saw and it was perhaps our best game drive during our two night stay in the park. 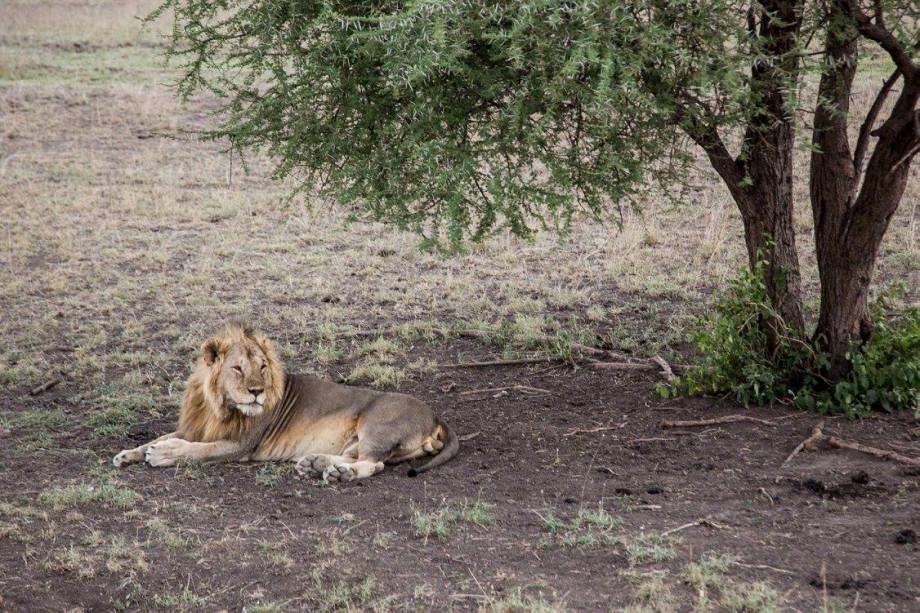 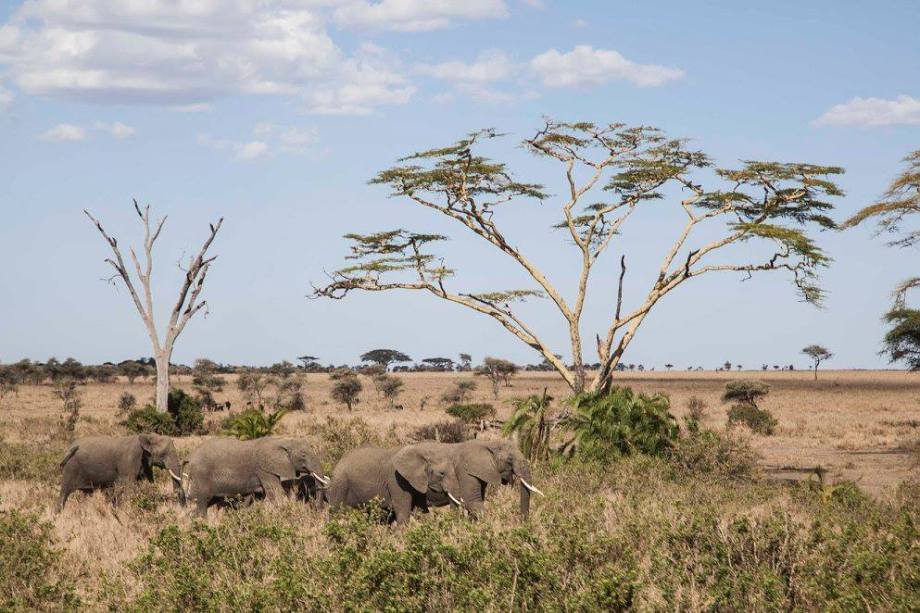 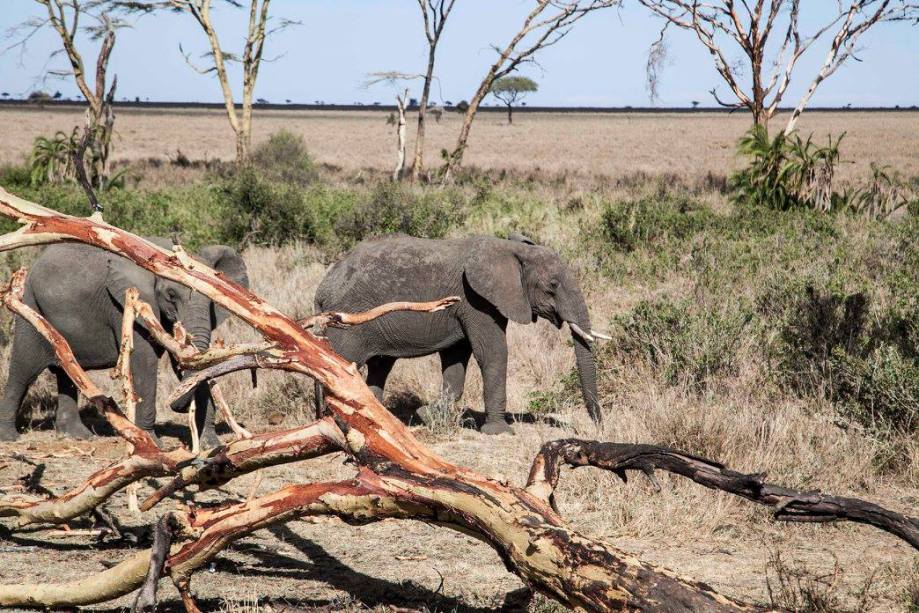 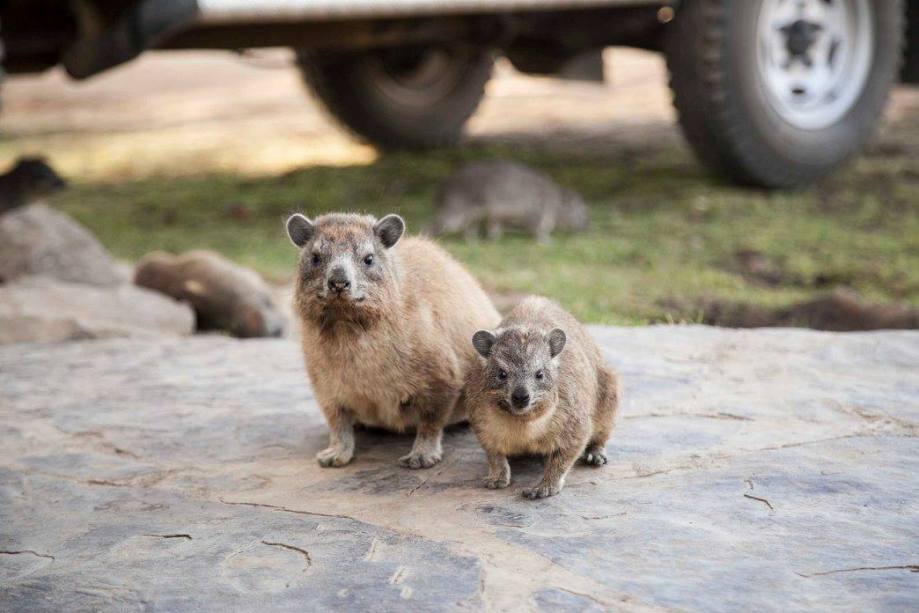 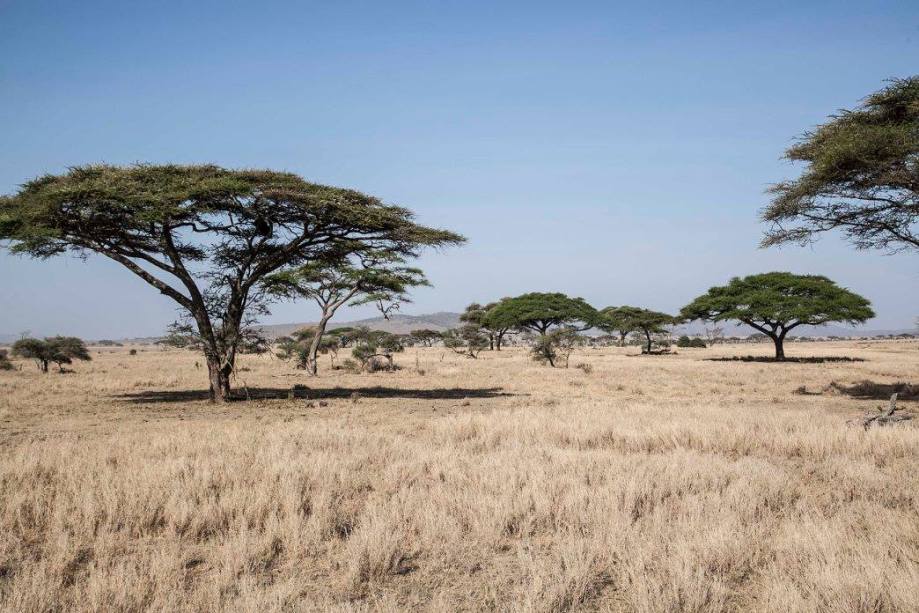 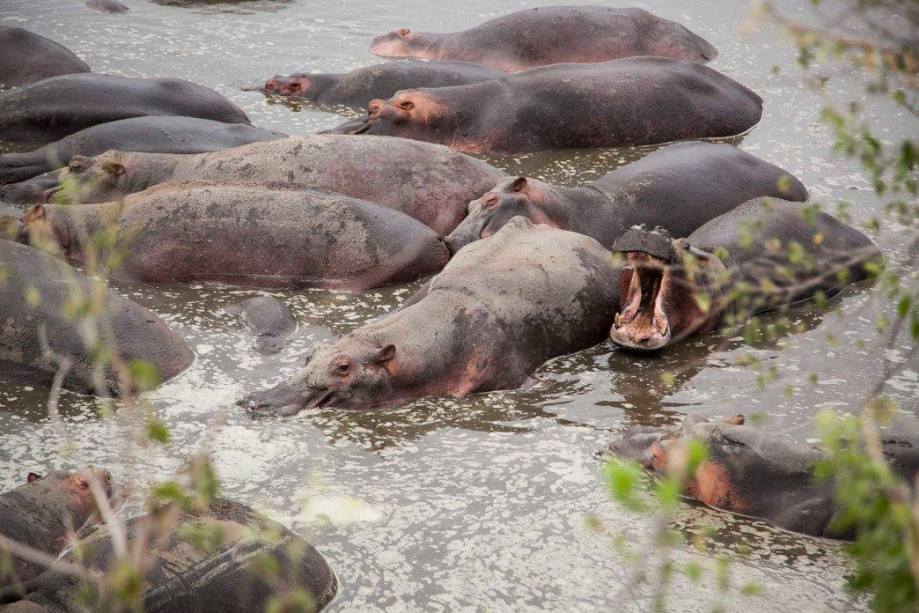 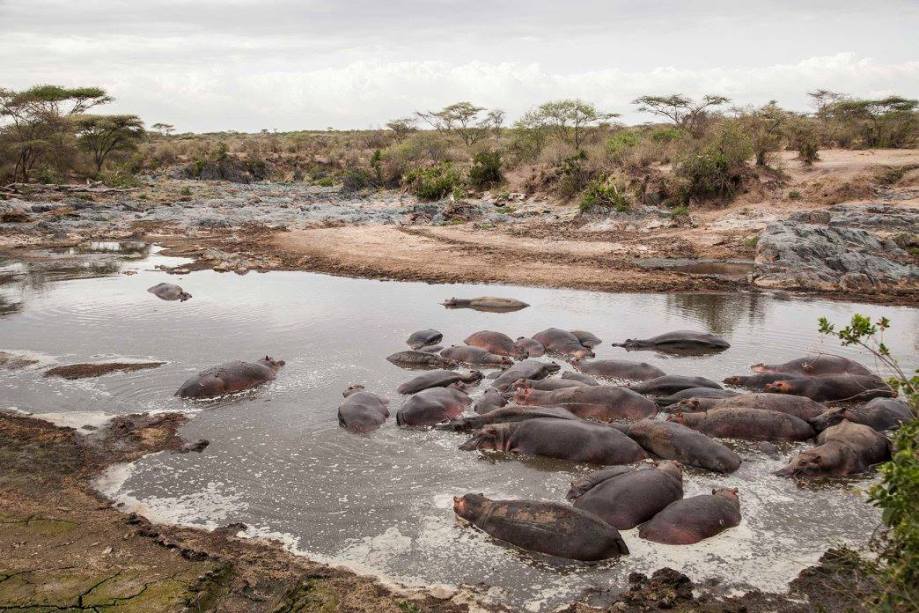 Living in Oman means that I’m so much closer to many parts of the world, including Africa. Africa was not on my ‘must do’ travel list, mainly due to the cost of getting there from Sydney coupled with the cost of a safari. I always thought it may be somewhere I’d travel to one day, but it was not on the bucket list. I have been pleasantly surprised with many places I originally had no great intention of travelling to, but due to circumstances, had decided to visit. And Tanzania was no exception.

I had to be out of Oman due to visa requirements and preferred to go somewhere somewhat interesting for a week, rather than simply spending a weekend in Dubai. I intended to travel somewhere reasonably close which wouldn’t cost me a fortune. After considering a few destinations, I decided on flying to Nairobi and visiting either Kenya or Tanzania. I initially wasn’t sure which country to visit. The drawcards for Kenya were Masai Mara National Park and a visit to a Masai village. And for Tanzania, I was keen to visit Serengeti National Park and Ngorongoro Crater. After a bit of online research and weighing up some pros and cons, I decided to go with Tanzania.

Being a solo-traveller for this trip, I looked into various tours of Tanzania. Private tours were out of my price range, so I opted to join a group tour organise by Intrepid Travel. And I wasn’t disappointed.

Our first stop after departing Nairobi was Musoma, on the shores of Lake Victoria. We had a wonderful campsite by the lake and spent an afternoon exploring the nearby villages on push-bikes with a local guide. The village children were so excited to see us, running out of their homes to wave to us as we rode by. Although they do see westerners now and then, they were still overjoyed by the sight of ‘white people’. We stopped by some local markets and in a couple of the villages, to see how the people live and to talk to some of the locals. Many of the children were initially rather shy and embarrassed to have their picture taken, but they quickly warmed to us and were more than happy to pose. Although the people live an extremely simple life, the children seem more than happy to play outside with one another. Unlike in western countries where children are increasingly home bound and isolated, you can see that these children in Musoma have a great sense of community.

After a night by Lake Victoria, we headed towards Serengeti National Park for two days of game drives. 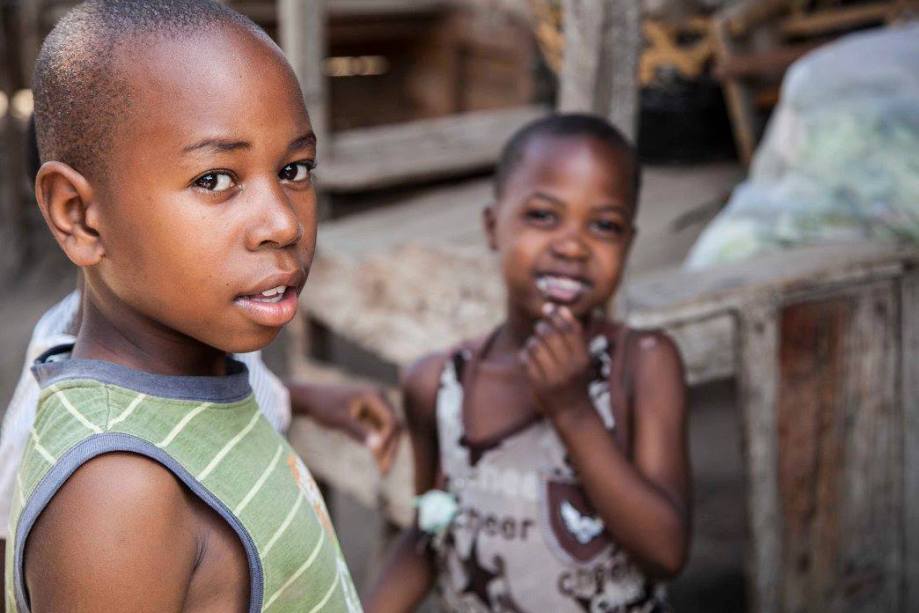 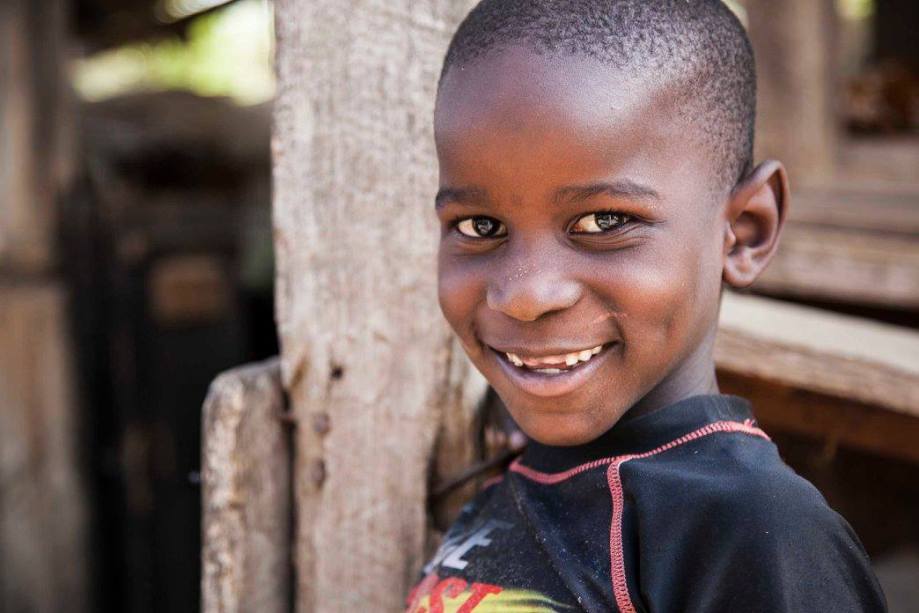 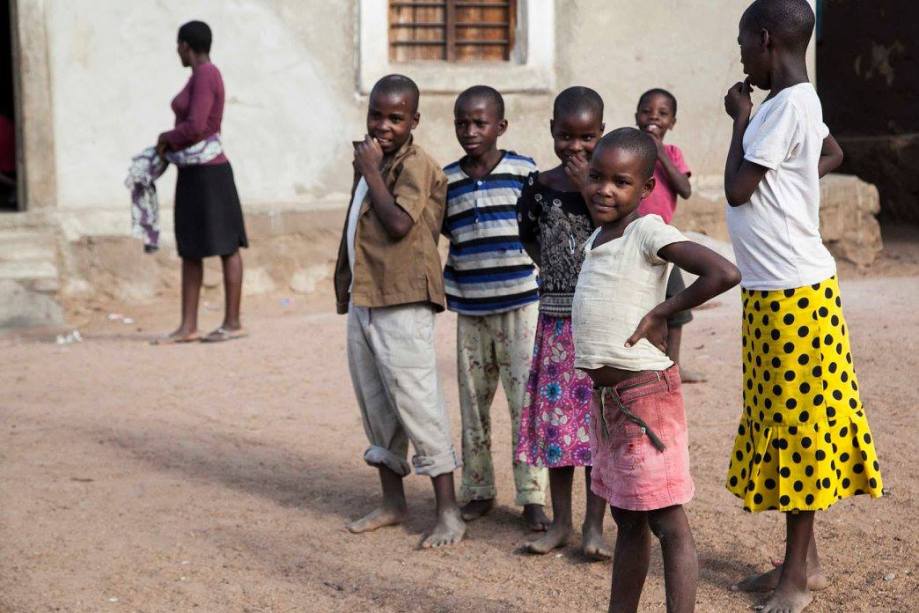 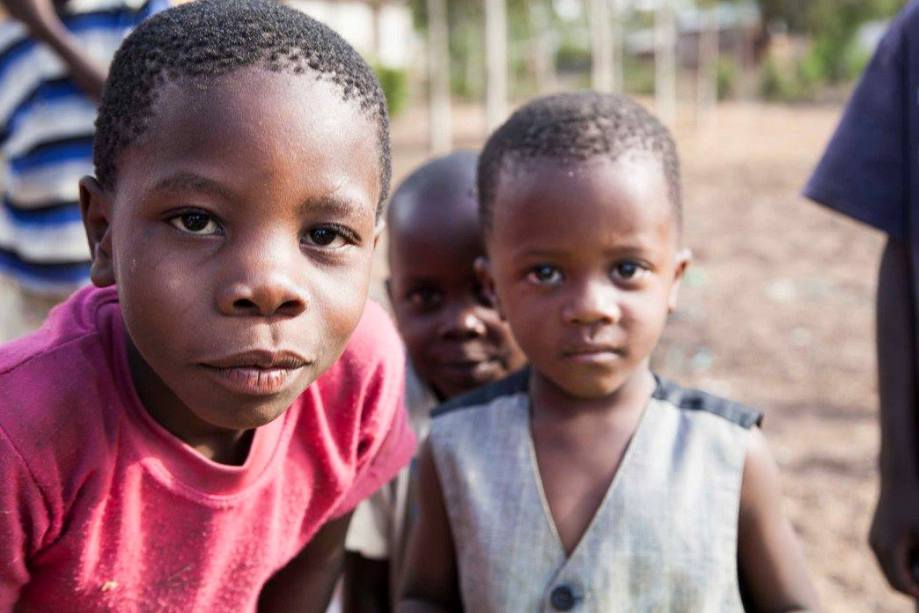 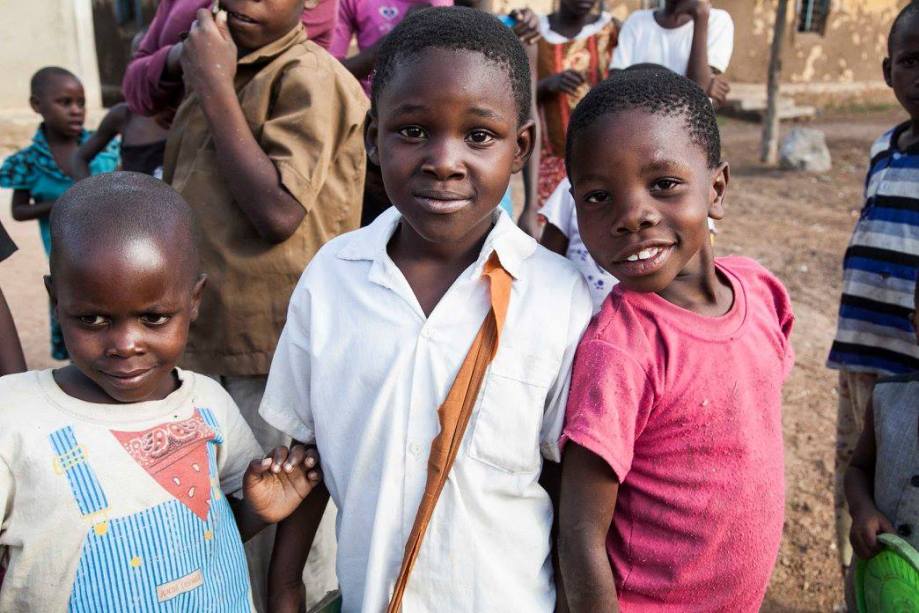 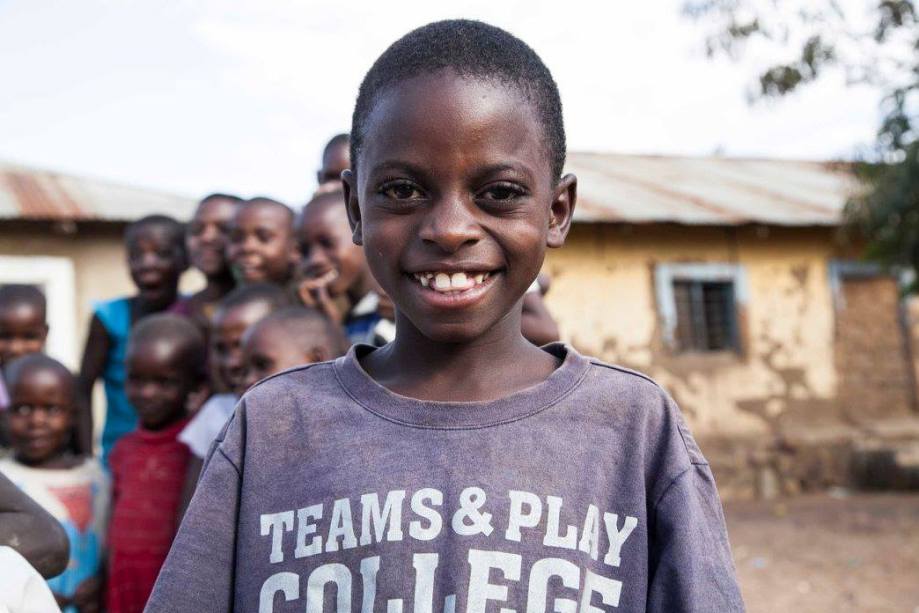 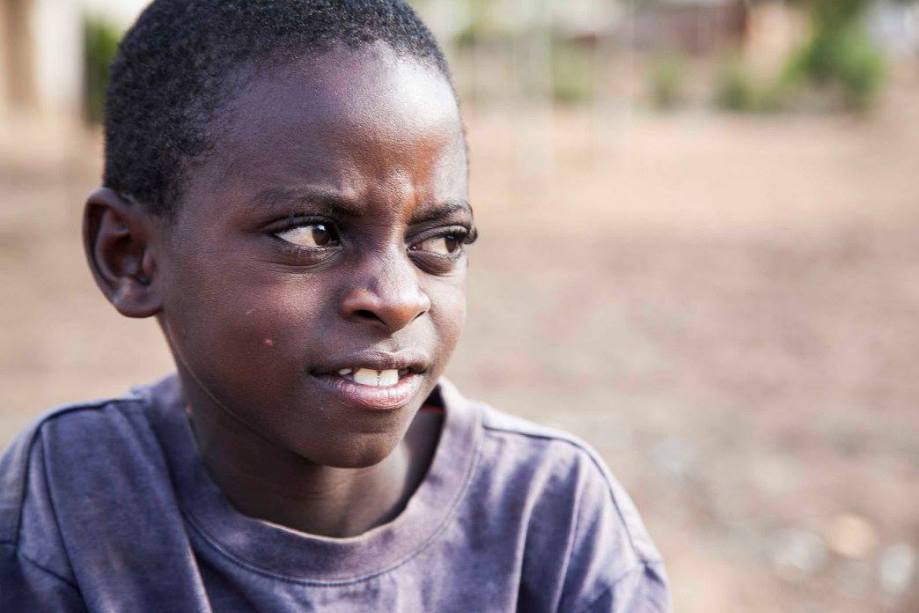 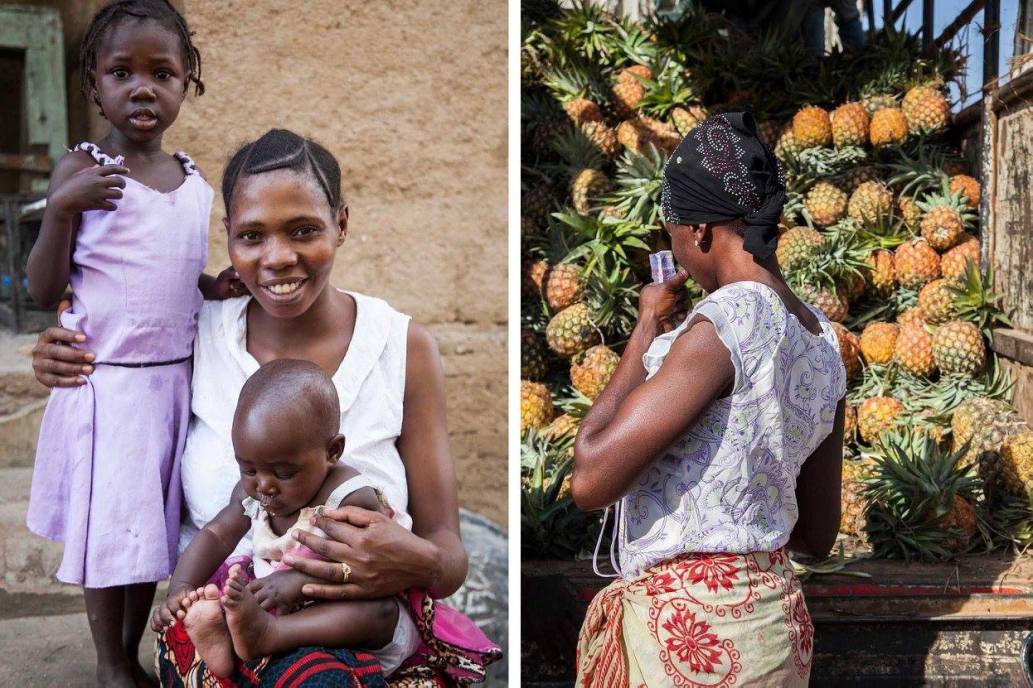 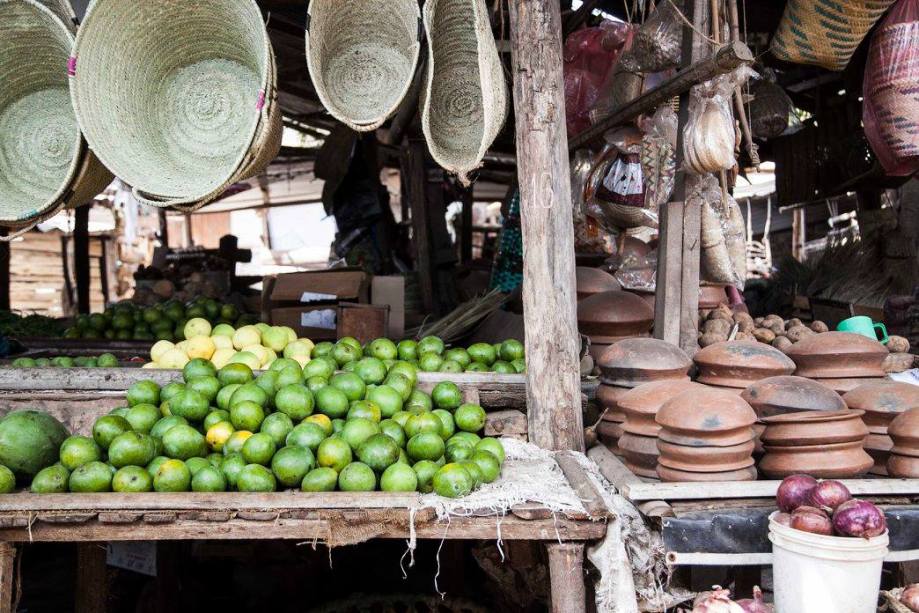 Getting there:
Nairobi airport is the hub for east Africa. You can fly to either Arusha or Dar Es Salaam, but flights are usually cheaper and more frequent to and from Nairobi. There are a number of tour companies which operate out of Arusha, quick cuts your travel time to and from Nairobi. So if you’re short on time and happy to pay a few extra dollars, this may be the way to go.

Tour:
There are a plethora of companies offering tours in Tanzania. There are a number of factors which go into selecting the right operator for you: a private or group tour, camping or lodges, budget, travel time, itineraries, safety, etc. So take your time contacting a few companies, asking questions and making comparisons. It could make a difference in making your trip enjoyable.